Skip to main content
Alok Sharma, the Member of Parliament for Reading West, has today revealed the results of a survey on the future of Pincents Hill, which demonstrates a continued overwhelming opposition to the development of the site.

Between 2008 and 2011, together with local residents and the Save Calcot Action Group, Alok and local councillors Joe Mooney, Tony Linden and Emma Webster, worked to save Pincents Hill from a development of 750 homes and various commercial units. In 2011 Eric Pickles, the Secretary of State, dismissed developer Blue Living’s appeal.

The most recent survey was delivered to around 3,000 homes and to date, 721 households have replied. 90% of survey respondents indicated that they did not consider the Pincents Hill site to be suitable for any development.

It was also revealed today that the Pincents Hill site has been included as a potential site for development in West Berkshire Council’s draft Housing Site Allocations Development Plan Document (DPD) and a public consultation on this draft document is being run from today until the 12th September 2014.

Alok Sharma said: “More than 700 households responded to this survey, which is a phenomenal return rate and just goes to show how much local people care about this site. The overwhelming majority of those who responded do not want to see this site developed due to legitimate concerns about traffic, the pressure it would put on local public services like schools and doctors surgeries, the impact it would have on wildlife and the character of the area.”

Alok continued: “I understand that West Berkshire Council has a duty to ensure that its local development plan meets the needs of a growing population and has to consider sites presented to it, so that the Council is not left open to a legal challenge from potential developers. However, my constituents have made it clear once again that they believe Pincents Hill is completely unsuitable for development and I will be vigorously opposing its inclusion in the final Development Plan Document.”

Alok concluded: “I will be meeting with Councillor Gordon Lundie, Leader of West Berkshire Council, as well as Council Chief Executive Nick Carter to discuss the results of this survey and set out the views of local residents. I will also be writing to everyone who responded to my survey, urging them to take part in the public consultation, which is our chance to make our objections known formally to the Council.”

The consultation is available to be responded to online now by visiting: http://consult.westberks.gov.uk/portal/hsapreferredoptions. 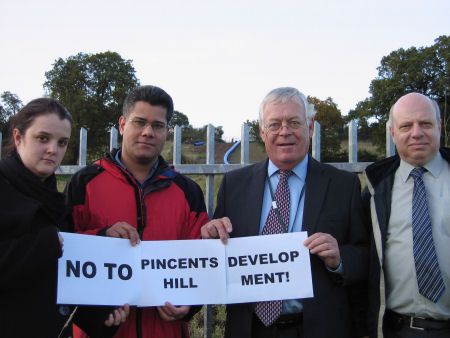