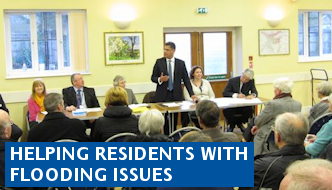 Some areas in the Reading West constituency have in the past experienced severe flooding, with some residents living in Pangbourne and Purley affected particularly badly.

“I will continue to work with the Environment Agency and West Berkshire Council to ensure that residents’ concerns are listened to and to lobby where necessary for funding.”

“Many of my constituents in Purley have been waiting for over a decade for some form of flood alleviation scheme, and now we finally have the bund. We all understand that during particularly bad weather events there will continue to be a risk from flooding, but talking to my constituents I know they are delighted that this scheme has finally been delivered and hopefully it will make a difference.”

Helping residents with flooding issues: In the Press