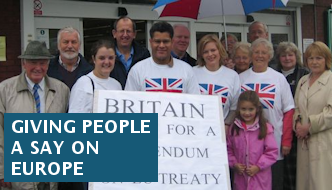 Giving people a say on Europe

It has been 40 years since the British people last had their say on Europe in a referendum.

“My own view is that the country’s best interest is in a reformed European Union focused on maximising trade and increasing competiveness, which is why I am delighted that the Prime Minister has committed to re-negotiating our position in Europe and to bringing back powers from Brussels to Westminster.”