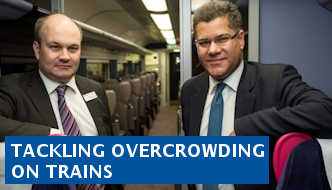 Alok has been campaigning for additional capacity on Reading trains to help ease overcrowding.