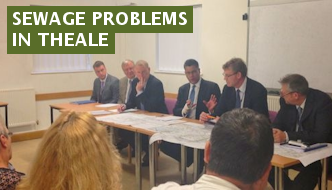 The Lambfields site in Theale has for a number of years had problems with sewers flooding, which has required large tankers to park for long periods of time and pump sewage out. During wet weather, some roads in Theale were affected by sewage flooding and some properties also suffered sewage back-ups.

Alok has lobbied Thames Water for action to resolve the flooding issues caused by blocked pipes and old pumping equipment.

Thames water agreed to carry out works including:

“Having your home flooded with sewage is absolutely dreadful, so I am delighted that after several years of suffering, residents will get some relief from the sewage tankers and work is being done to prevent flooding from occurring in the future. I will continue to make sure that the right level of investment from Thames Water goes into improving the sewage system in Theale.”

Sewage problems in Theale: In the Press