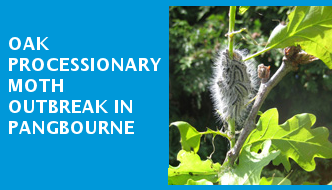 The Oak Processionary Moth (“OPM”) was first found in London in 2006. Despite considerable attempts to control it, the OPM spread in London. In late 2010, an outbreak of the OPM was found in Pangbourne. The OPM, which can cause skin irritation and respiratory problems if people come into contact with OPM caterpillars, was discovered in and around the village by the Forestry Commission. The cost of treating infected trees is significant and as such there is a considerable desire to control the outbreak and eventually eradicate the OPM from Pangbourne altogether.

“It was incredibly helpful to get Jim Paice’s support for the work to be done by the Forestry Commission in this critical year. The OPM is not only bad news for oak trees but can also present a potential health risk for humans and so it is vital that this outbreak is contained and eradicated before it spreads and does any more damage.”

Oak Processionary Moth Outbreak in Pangbourne: In the Press