Alok Sharma, the Member of Parliament for Reading West, on Thursday 31st July 2014, gave a keynote speech at an Afro Business Exposition held at the Royal Berkshire Conference Centre.

The three-day event, which was organised by local company Motherland Connects aimed to help local companies to invest in Africa, as well as attract African businesses to Reading and the Thames Valley. The event was also attended by representatives from UK Trade and Investment, UK Export Finance, Thames Valley Berkshire Local Enterprise Partnership and Thames Valley Chamber of Commerce.

During his speech, Alok outlined the opportunities that Africa provides to businesses in the UK and its potential for future economic growth. Speaking during the event Alok Sharma said:

“We all understand that Africa has its challenges but what it is also clear that Africa is increasingly a Continent which offers huge potential and opportunity, and British business cannot afford to miss out.”

“Six of the ten fastest growing economies in the world are in Africa, which is forecast to outpace the world economy by almost 2% until the end of the decade. Africa is increasingly connected and mobile phone subscriptions have increased tenfold in ten years to around 550 million.

Outlining the assistance that the government is offering to UK businesses looking to export to Africa, Alok said:

“In addition to helping British companies to trade with Africa, the UK is also shifting the focus of our aid money towards economic and sustainable development. Something I greatly welcome.”

Alok also encouraged attendees from African companies to do business and invest in the Thames Valley:
“I say to our Friends attending from Africa and African-based businesses, you are in absolutely the right region if you want to meet British businesses with a “can-do” attitude who want to work with you in expanding Anglo-African bi-lateral trade and investment.

“And on a national level we have a Prime Minister, a Chancellor, a government determined to see business succeed and exports and inward investment to grow. We have been lowering corporate taxes, cutting red tape which holds back business and incentivising our businesses to export.”

Ngozi Fakeye, Principal Consultant at Motherland Connects said: “We are delighted and grateful for the support from our MP Alok Sharma in organising the First ever Anglo African Trade Expo in Reading. It was a resounding success and are looking forward to the 2015 exposition.”

Paddy Docherty, Chief Executive of Phoenix Africa Development Company said: “Africa offers an exceptional opportunity for investment, and any investor who isn’t active on the continent is missing out. GDP growth in the double digits is normal for many African countries. Sierra Leone, for example – though often neglected because of lingering associations with the rebel war of the 1990s – provides a low-risk, genuinely democratic place to do business, and Phoenix Africa is extremely excited to be there.”

For more information about the event visit: http://www.afrobusinessexpos.com/ 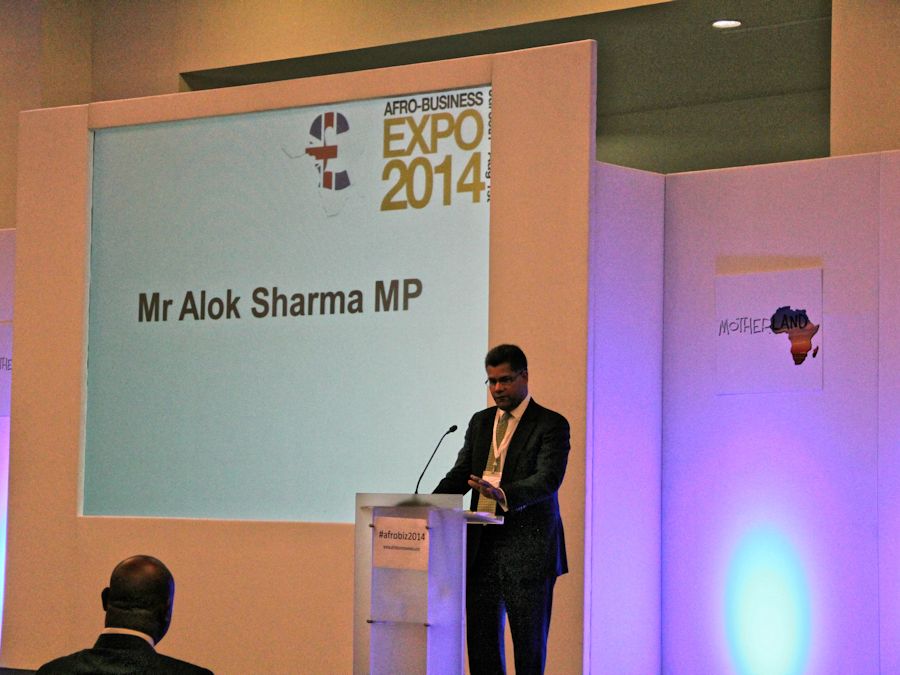