Skip to main content
On Saturday 15th January, Alok Sharma, MP for Reading West, and Richard Benyon, MP for Newbury joined Trooper Potts Memorial Trust Chairman Councillor Fred Pugh, Chairman of Reading Civic Society Richard Bennett and other civic leaders together with officers from 94 (Berkshire Yeomanry) Signal Squadron and representatives from The Forgotten British Gurkhas to launch the Trooper Potts VC Memorial Appeal. The appeal, organised by the Trooper Potts Memorial Trust, will raise funds to build a permanent memorial to Reading’s only Victoria Cross hero and the men and women of the Berkshire Yeomanry.

In civilian life Fred Potts worked in a factory on the Oxford Road in Reading. However, on 21st August 1915 as part of the Berkshire Yeomanry fighting in Gallipoli, Potts exhibited exceptional bravery. As he was attacking a Turkish position he was hit in the leg by a machine gun bullet. Whilst crawling to safety he discovered a fellow townsman, Arthur Andrews, badly wounded and unable to walk. Over the next 48 hours, Potts set about rescuing Andrews from the battlefield. Despite the heat and thirst and with the battle raging around them, Potts dragged Andrews on a shovel back to safety. He was awarded the Victoria Cross and was hailed as a hero in his home town and beyond. The Victoria Cross is Britain’s highest award for gallantry and was awarded to Potts to recognise his “most conspicuous bravery in rescuing a comrade under heavy fire”.

The Trooper Potts Memorial Trust proposes to build a life-size bronze sculpture depicting Fred Potts dragging Arthur Andrews to safety. The aim is to have built the sculpture by the centenary of the action, in August 2015. In order to make this plan a reality £250,000 needs to be raised.

On the occasion of the launch of the appeal, Alok Sharma said: “It is right that we commemorate the story of Trooper Fred Potts’s bravery. He was a true local hero and I am very pleased to be able to support the campaign for a permanent memorial to him. The story of his courage is an inspiration to this day.”

Richard Benyon added: “This campaign will right a wrong by formally recognising Potts and the Berkshire Yeomanry for the first time in the town of Reading. With our armed forces involved in wars around the world, it is more important than ever to recall the bravery and sacrifice we ask of them, which Potts’s story encapsulates.”

Further information on The Trooper Potts Memorial Trust and the appeal can be found at www.pottsvctrust.org. 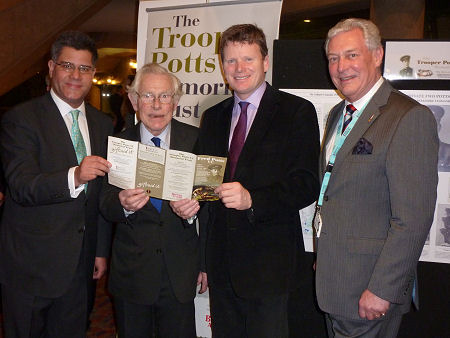