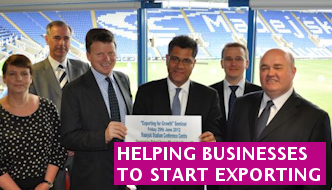 In the UK, around 1 in 5 UK SMEs export. Across Europe, the average is 1 in 4. If the UK got the number of small and medium sized exporters up to 1 in 4 – in line with the European average, this would add approximately £40bn to total UK exports and a massive boost to our economy. Alok is keen to support local businesses to help boost their exports.

“Some of the biggest opportunities for the UK are in markets like India and China, which in recent years have seen their economies grow at a consistently high rate, despite the global economic slowdown. Starting to export to these countries can initially be a daunting prospect for a small or medium sized business but with the right guidance exporting can prove to be very rewarding for a business.”

Helping businesses to start exporting: In the Press