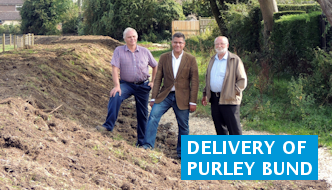 Purley-on-Thames has experienced severe flooding in the past. A report carried out in 2004 by the Purley Flooding Review Team made a number of proposals to protect people and property from future flooding but a lack of funding meant little action was taken.

“Many of my constituents in Purley have been waiting for over a decade for some form of flood alleviation scheme, and now we finally have the bund. We all understand that during particularly bad weather events there will continue to be a risk from flooding, but talking to my constituents I know they are delighted that this scheme has finally been delivered and hopefully it will make a difference.”