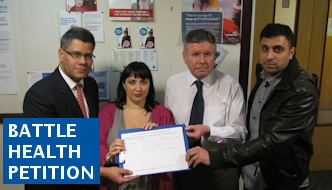 Alok was approached by residents living in the West Village in Battle ward, concerned that the approximately £1.5 million being provided by housing developers previously designated to improve local health facilities may not be allocated effectively by Reading Borough Council.

In 2006 Reading PCT signed a section 106 agreement with building developers, which agreed to sell land to developers in exchange for a shell and core building for housing a Health and Well Being Centre on the Oxford Road, at the site of the former Battle Hospital. However, plans for the centre were cancelled in December 2011, following the opening of the Reading Walk-In Centre in the Broad Street Mall.

Despite the decision to cancel the new centre on the Oxford Road, NHS Berkshire and local Clinical Commissioning Group leaders expressed recognition of the fact that GP practices within the locality need help to improve their premises to enable them to provide more services to patients and agreed to work with Reading Borough Council to find an appropriate way to spend the section 106 money for the benefit of health services in the local area.

“This is a large sum of money that could go a long way to help local GP services expand and improve services they can offer to patients. Given the large number of building developments that have been approved in the local area there is a need for expansion to prevent GP surgeries from coming under any further pressure. It is very important given the cancellation of the proposed new health centre that the Section 106 monies are used to provide incremental improvements to services for patients and are not just used to fill other areas in the council’s budget or for routine improvements to surgeries.”

Battle Health Petition: In the Press